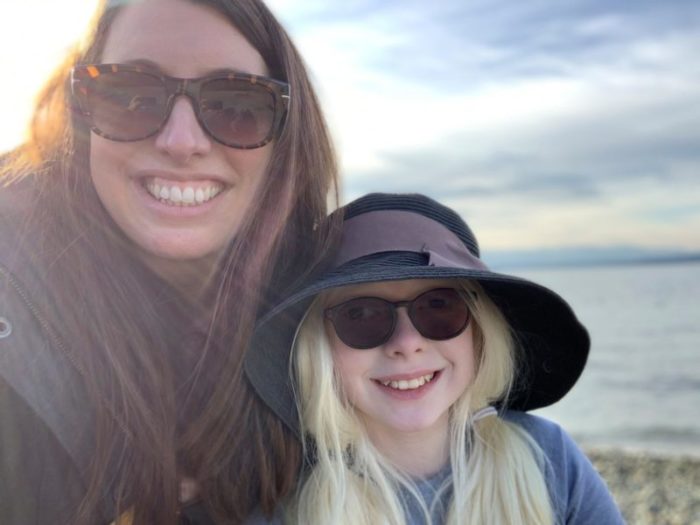 Plenty of parents are working from home as well as taking care of their kids, who may or may not be returning to school in the fall. But not every parent is a Teacher of the Blind and Visually Impaired (TVI) who also has a child who is visually impaired.

For Meghan Stott and her daughter, Kaitlin, who was born with albinism, this juggling act isn’t exactly new. Meghan works part-time for the Washington State School for the Blind, so even before COVID-19, she would be home when Kaitlin was.

Meghan is actively involved in her daughter’s education — now more than ever, although Kaitlin, who will be entering sixth grade in the fall, has her own TVI and Orientation & Mobility (O&M) Specialist. Meghan thinks that level of engagement is something more parents appreciate now because of the pandemic.

“I’ve always felt like parents need to be involved in their kids’ education and I sometimes feel like there’s a disconnect between what we do at school and what happens at home,” she says. “As a teacher, I’m one half of the team while parents are the other half, so in some ways it’s part of my job to teach parents to be a paraprofessional for their child.”

Meghan values the chance to connect what Kaitlin is learning to what her group of 14 students is working on, which is also nothing new. For example, Kaitlin was working with her own TVI on writing an electronic document using her refreshable braille display — and it gave Meghan an idea.

“I have a kindergartener who is headed in that direction,” she says, “so I’m storing that knowledge he’ll need in a year or so.”

Because Kaitlin enjoys socializing and, as an only child, doesn’t have the same kinds of opportunities she did at school, Meghan has found ways to connect Kaitlin with some of her students. Two students Meghan is working with have similar needs, so she created an online low vision book club for those students and Kaitlin, who all went to camp together.

Because the schools in Washington shut down abruptly, many students didn’t get to bring everything home with them. So, just as she looked for creative ways to keep Kaitlin engaged at home — like setting up online chats so she can play video games with her friends — Meghan offered parents ideas for being creative with items around the house.

For example, one student discovered a love of gardening, which gives him a chance to work on the independent living skills that are part of the Expanded Core Curriculum (ECC). With his mom’s help, the student is learning to identify the sounds of different types of birds, too. Another student enjoys baking, so Meghan suggested making braille cookies. She’s also done whatever she can to help parents who are struggling.

“I have one student whose mom is having trouble getting out of the house with her kids to even get groceries so she was feeling really overwhelmed,” Meghan explains. “Some of my colleagues and I got together and sent a box of small items the student could use for a treasure hunt around the house.”

Although Kaitlin had regularly scheduled calls with her TVI and O&M Specialist during the end of the school year, at first Meghan admits she relaxed rules about things like bedtime. But she quickly realized that creating a new routine was healthy for everyone, even if it is more laid-back.

“I let Kaitlin stay up a little later listening to books because her day starts a little later, but we both get up to an alarm,” Meghan says. “The structure has been really key for us — things like eating lunch together and playing in the kitchen together at night.”

She admits, though, that online learning gives her students and Kaitlin more freedom to work at their own pace, as long as they finish their assignments on time. One of Meghan’s students finished two weeks’ worth of work in one, so she then got a week off. For Kaitlin, learning from home has opened new doors to accessibility.

“Her science teacher used to give her copies of pages from the text book, which were really hard to read even when we enlarged them,” Meghan says. “Now we have the online version of the textbook, which is so much better. I hope once everyone returns to the classroom every teacher will realize just how important accessibility is.”