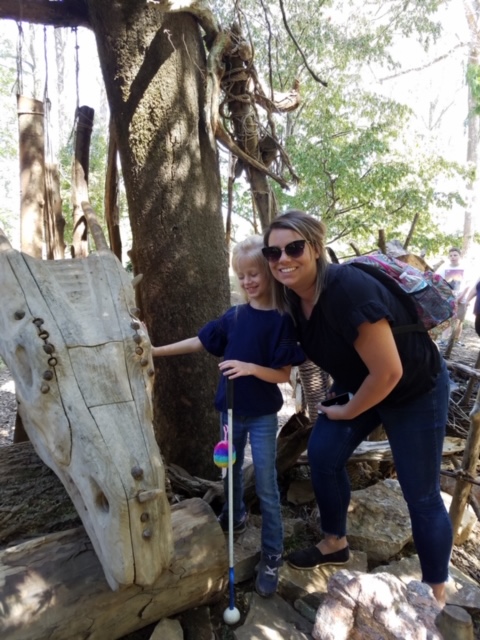 I’ve spent the last nine years constantly adapting to the needs of my child, often while juggling my career and the needs of the rest of my family. I’ve been the schedule keeper, the chaos coordinator, the soother, and fighter. I was whatever my daughter needed me to be without even thinking about it.

Since Addy was in kindergarten, we worked hard to integrate her into a shared school placement between our state school for the blind and our local public school. She had been spending Monday through Thursday at Kentucky School for the Blind, while spending Fridays at our local elementary school. At the beginning of Addy’s second grade year, her TVI told me she would be leaving once they found a replacement for her. She had spent five years working with Addy, and I trusted both her judgment and abilities to help Addy succeed. I was bummed to say the least, but stayed positive that someone new and exciting would come in and would continue to help Addy progress.

Things didn’t really go as well as I had hoped. A few months later, in a meeting, I learned Addy’s new TVI had resigned. At this point, I wasn’t sure how to move forward. It had taken months to find a replacement and it would be hard to find another TVI, especially one who was already certified. The meeting was a blur. It was hard to put plans in place for the upcoming year when we didn’t even know if there would be a TVI to carry out the IEP at our local school. We agreed to meet again and go over all of our options at a later date. When we walked out of the meeting, I immediately looked at my husband and told him I wanted that job. It was likely they would have to hire someone who wasn’t certified yet and they would have to work on their certification while working as a TVI. I thought to myself, “why not me?” Our county’s Director of Special Education had attended the meeting that day. I had never met him before. I immediately approached him as he was walking out and told him I would like to be considered for the job. We talked some things through and he told me how to apply.

Fast forward to a few weeks later, and I was working as a TVI and enrolled in graduate school! It was such a drastic and fast transition, but it felt like the perfect opportunity and I did what I had been doing all along. I adapted, not just for my child but for all the children in our county with a visual impairment. I’ve been working on my certification for over a year now, and have a full school year as a TVI under my belt. I still have a lot of work to do, and a lot to learn, but I’ve never felt so sure about my place in this world.

Brittany Clarkson is an example of a mother who will do anything for her children. When her daughter, Addy, didn’t have a TVI, Brittany applied for the job, and enrolled in graduate school. Brittany shares with FamilyConnect her experiences as both a mother of a child with a visual impairment, and a TVI.