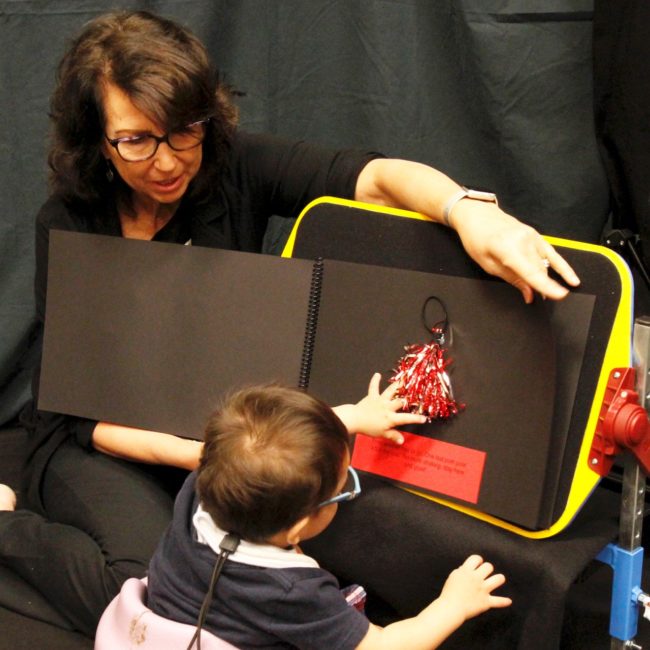 We spent a lot of time during CVI Awareness Month in September talking to experts, so we could bring parents insightful, practical advice. We share our learnings with you now, because recognizing and managing CVI is important all year long.

If you have an infant or a toddler, do you notice anything unusual about the way they look at objects? Perhaps they’re fixated on looking into lights which, especially in infants, is not typical. Maybe they don’t look at people’s faces, even yours. Perhaps they don’t notice changes in facial expressions. They might have trouble seeing fast-moving objects – or can only see objects that are in motion. As children get older, some may have problems reading words unless the words, letters or lines of print are spaced apart.  In high school, students with CVI may succeed in classes and still struggle in subjects like geometry when it comes to locating or placing points on a graph, or in social studies when trying to locate details on a busy map. Others may get easily lost, not recognize familiar people in a crowded hallway or unexpected setting, have trouble walking on uneven surfaces, or seeing changes in surface textures, says Amanda Lueck, Ph.D., a Teacher of the Visually Impaired (TVI) and Professor Emerita, Department of Special Education at San Francisco State University.

These are all possible signs of CVI, which is often referred to as Cortical/Cerebral Visual Impairment. Not everyone agrees on the terminology, but what experts do agree on is that early diagnosis and intervention is crucial – and parents are on the front lines, because they know their children best.

Developmental delays you might notice if your child has CVI include an inability to self-feed because your child doesn’t see the little pieces of food on the tray, delayed fine motor movements or gross motor movements – such as rolling over, crawling, and walking – or starting to talk later than expected. In children with cerebral palsy (CP) these motor challenges might be overlooked as part of the CP when they might very well be the result of CVI.

CVI can be present at birth or develop later in life as the result of trauma to the brain, such as an injury or brain tumor. It’s extremely important to be on the watch for CVI in infants and toddlers who may pass a typical eye exam despite having the condition. It is also important to be aware that CVI may also present but not identified in older children who did not receive screening or assessment in their formative years.

“The earlier intervention begins, the better the outcome because soon after birth is a wonderful time of visual plasticity,” says Christine Roman-Lantzy, Ph.D., one of the first to study CVI and the director of the Pediatric VIEW Program at West Penn Hospital in Pittsburgh. “Visual plasticity” refers to the brain’s ability to adapt and strengthen connections that impact vision. “The average age of a CVI diagnosis is almost four years old, and that’s not okay.”

Diane Sheline, M.Ed., a TVI who works with children with CVI, adds that the ideal time for intervention is between six and nine months of age, and all interventions should be based on assessment results.

Getting the right diagnosis and intervention team

Because CVI is often misdiagnosed, parents working with pediatric ophthalmologists should do their own research and bring what they’ve learned about CVI to their child’s eye doctor and ask meaningful questions. Parents should ask about specific assessments to diagnose CVI or whether their child should be evaluated by a pediatric neuro-ophthalmologist.

Children diagnosed with CVI have complex learning needs. Sheline recommends that parents work with early childhood intervention programs in their community or school district. Depending on your child’s needs, they may work with a TVI, Orientation & Mobility (O&M) Specialist, physical therapist, occupational therapist, speech therapist, social worker, general or special education teacher, and more. Plus, children should be reassessed periodically to evaluate their progress and determine if intervention changes are needed.

“The most important thing is that parents see their child progressing in their learning,” Dr. Roman-Lantzy says. “It’s not just about vision for vision’s sake – it’s about helping the child learn, and if that isn’t happening parents need to advocate.”

It’s helpful to periodically ask your child what they see, especially as they grow. Although they may not know what a typically sighted person sees, they can describe the world as they see it.

“Parents often ask, ‘What’s going to happen to my child down the line?’ and because CVI is so idiosyncratic it’s not possible to answer that,” Dr. Lueck says. “But if you look at progress one step at a time and set sub-goals going toward larger goals, it’s easier to feel confident about progress.”