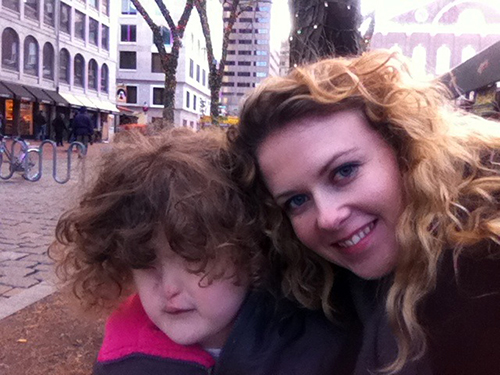 I have no doubt that my daughter Madilyn learns the most from a multi-sensory experience. With it, she gains true comprehension. Madilyn is completely blind, diagnosed with bilateral anophthalmia, and struggles with sensory stimulation.

There was a time not so long ago in which taking Madilyn (now 9) on a trip to the museum wasn’t even an option. It’s not that we never tried, but prior to 2013 most activities that involved an unfamiliar setting with various noises and voices ended in failure. For our family, failure often looked and sounded like an overwhelming, crying fit fueled by my frustrations for not knowing how to help her cope.

When she was younger, she didn’t know how to tune out the buzzing of lights or dishwasher running in the next room. Handling the hustle and bustle in a crowded restaurant definitely wasn’t possible and though I missed eating out, it was of course okay. I understood her anxiety and didn’t blame her one bit. But when it came to lost opportunities like socialization at a friend’s party or enjoying a kids’ concert, it always made me sad. Even a little frustrated. Sometimes a lot frustrated. It wasn’t that I didn’t understand, but that I didn’t know how to help. I wanted her to enjoy life, and play and be happy around others.

Time went on and slowly, I learned how to help her deal with the overwhelming stimulation. I did my own research on the Internet, read books, thought and thought and thought… Therapists implemented sensory integration techniques, and we incorporated even more at home. Things became easier as her communication skills advanced and she began telling me what was wrong. I picked up on signals, too, like when she would hold her shoulder to her ear. It didn’t necessarily mean something was too loud, or even that her ear hurt. It simply meant, “No, I don’t like this.”

It wasn’t just hard on Madilyn. It was hard on me, too. I wanted to develop my own friendships and have my fun as a mom of a toddler like all the other moms I saw attending swimming lessons and birthday parties. Some days, not as many as it could have been, but some days I was more overwhelmed with missing out on many of the things I thought being a parent was about, that I overlooked the progress Madilyn was making.

It has taken several years and much trial-and-error, but now she deals with outings pretty well. In fact, these days it’s more of a struggle to find enough stimulation for her.

Recently, the reason for failure has been quite the opposite of what it use to be. It is pure boredom that if not recognized in time turns into the overwhelming, crying fit filled to the brim with anxiety. Inaccessible and under-stimulating exhibits (i.e. mostly visual elements) never work—regardless of how many times I say to myself, “This time it will be different.”

And unfortunately many children’s activities rely on the sense of sight to be enjoyable. Just because it has sound doesn’t necessarily mean that it is going to be descriptive and engaging. I have described to her as much as I could every day since she was born. We’ve presented her with braille, tactile images, textures, audio description on movies and television, description of images and her surroundings, assistive technology, and everything else I could find to enrich her world.

Now, she has began requesting description and asking more detailed questions about what things are, the way things look, how they work, and more. She asks if a new movie she hears advertised on TV has descriptive audio. She asks if a sign I’m reading aloud has braille. She’s becoming her own advocate. I’m teaching her to expect these services; and, although the lack of accessibility around her now is frustrating and leads to boredom, fits, and confusion, one day she will stand up for herself and what she needs. And, that’s one of the best traits I can bestow upon her, I believe.

Until then, I’ll do my best to be everything she needs. I’m her advocate, her teacher, her friend—I’m her mother.