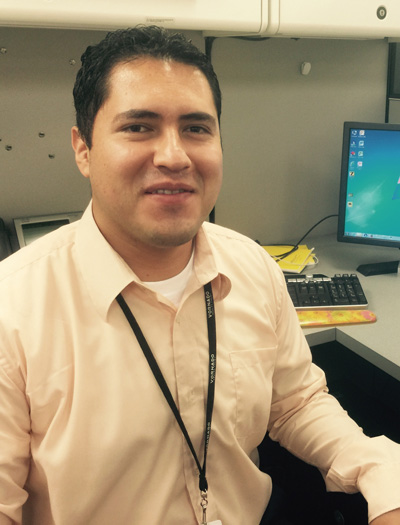 As Hispanic heritage month approaches, I think it is important to recognize the values and ethnic background and contributions that Latinos make to American society. First, Hispanics or Latinos are a multi-racial group. We are black, white, mestizos, as well as European-descended. So, Latin Americans are multi-racial.

In my opinion there are several types of Latinos in America: those who are born here, are brought young, and others that come when they are adults. The message that I would like to convey is that Latinos in America should try to keep their values, background, and identity. Thus, they become part of a multi-cultural society. Spanish-speaking people are the largest growing population in America. Spanish is considered to be a second language in this country.

First, self-identity refers to the way we look and think about ourselves and relationship to the society. We need to have a strong self-identity. We should contribute our own values and cultural practices. Having a sense of identity is the first step to develop a core of values. This is really important to Hispanic people as we can contribute so much to American society in terms of jobs, innovation, and education.

I think it is important to include as much as possible the values of your family’s background, especially if the person a Latino is born in America or brought to America early in their childhood. There is much to learn about Spanish heritage such as activities, events, celebrations, patriotic symbols, etc. However, a visually impaired child might be at a disadvantage in learning about those things because they need to experience them in a different way. For instance, a parent can show a patriotic symbol to children in a tactile picture or diagram and describe the flag’s colors, for instance. Parents can talk about the things they do for celebrations such as Independence Day as well as share their values, ethnic background, or foods.

Parents can teach children the history and values of their culture. Hispanic Heritage Month is a good time to explain to children what their symbols are and what they mean. Parents of children who are blind or visually impaired should also encourage their children to learn about their own background as much as possible. Check out books from the library to read together, or explore Bookshare’s offerings. Besides encouraging children to always remember their Hispanic heritage, they can also learn about the role of Latinos in American society.

Expectations for Children Who Are Blind or Visually Impaired

Sometimes we define our own boundaries or limits. When children are growing up, their parents play an important role in encouraging children to create their own limits or expectations. America is known as the land of opportunities. However, those opportunities do not just happen as a lucky coincidence; we need to find them. People need to work hard to get whatever it is they want in life. Issues such as racism, discrimination, and inequality have really decreased in American society but those issues still exist.

I believe parents should not set particular boundaries or limits of what their children role in society should be. Rather, parents should promote the development of that thing that they want to do. This is especially crucial in Hispanic families. In my opinion, some Latino parents can be over- protective of their children, and if a child is visually impaired they may set lower expectations of what they can do in life. Sometimes they might even think their child will not be able to pursue a career, job, or a higher education. For instance, many people still live with parents after their late 20s and this is more pronounced with visually impaired people. This might affect someone’s confidence, sense of independence, and freedom as an individual. Parents should create higher expectations for children, treat visually impaired children as equal to other children, and encourage their children to pursue whatever that they want to do in life.

The Role of Latinos in America

Having a multi-cultural and multi-racial community is beneficial for a society. It promotes diversity. America is a powerful country in the world. This is due to the large number of hard-working immigrant people. Throughout the years, diversity has contributed in many areas of society such as technology, health care, education, and business. An example is the tech company Google, which is largely composed of immigrant employees.

Another way to be more represented in society is by participating in elections. Due to the growing Hispanic population in America, it is important to choose leaders that will be more supportive of Hispanic communities. People who have the opportunity to become citizens should not hesitate to do so, and this can greatly improve the opportunities for others.

In conclusion, Hispanic Heritage Month was created with the purpose of recognizing Hispanic culture in America. It is very important to have your own identity and keep the values of one’s culture and also be part of American society, to be multi-cultural. Diversity contributes to the strength of American society. We need to participate in American society. Preserving our own values and culture along with having a well-defined identity and a sense of the role of Hispanic people in America will contribute to making our country even more powerful in the years to come.