Having a child with special needs can wreak havoc on your social life. Invites may come in for parties or more and the energy it takes to attend is sometimes too much. We often beg forgiveness from our friends when we turn down invitations, but fostering our friendships is important. Instead of always saying no, I’ve found some ways to make a new outing more enjoyable for us and Eddie.

Not long ago, I took the kids to a friend’s house for a dinner party. My husband was elsewhere, so I knew it would just be me and our three kiddos. From the moment I told Eddie we were going to a party, he just kept saying, “No. No Party.” Because he can become fixated, I heard “No Party” for almost the whole 20 minutes it took to get there.

When we arrived, I spent the first half hour making sure Eddie was going to be content. I knew that if he was settled, I’d be able to enjoy the social event, and so would his sisters. If he became too nervous or bored, his behavior would ruin everyone’s time, including his. When expectations aren’t set, or he doesn’t know what’s going to happen next, his anxiety gets the best of him.

To settle him in, I utilized these three steps: 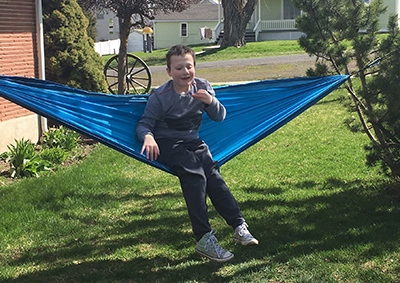 After a little time dedicated to lowering Eddie’s anxiety, we had a great evening. We were able to visit with friends, enjoy dinner, and relax—this was true for all of us, even Eddie. We talk about pre-teaching at school, so kids know what to expect, but we also have to take time to teach in the real world.

By simply making sure Eddie’s needs were met from the beginning, he could enjoy an unpredictable night out as much as the rest of us. The adults aren’t the only ones that need to get out once in awhile; Eddie and his sisters do too. An added bonus is that every new outing provides a learning opportunity, and we never want to miss out on those.

More from “Raising a Child Who Is Blind”

How Edward Came into the World

Gaming Day with Students Who Are Visually Impaired