For most elementary schools and parents, February means the annual valentine preparation. Last year, I was in “go mode” and was able to quickly get Eddie’s valentines in order, but with little help from him. As an afterthought, I realized I didn’t exercise any patience, and just saw it as an item on my daily checklist instead of a learning opportunity for Eddie.

Just like last year, I started by ordering braille valentines from National Braille Press. Then, I had high hopes of having Eddie braille his classmates’ names on the envelopes with my help. He does like to use the brailler on occasion, but it can take a lot of bribery.

When I told him we were going to make up his class valentines, he said “and then?” He was already anticipating the time when we’d be done with the activity. So, I said, “First valentines, then snack.” He seemed to like that end result, so he happily sat at the brailler.

For each name, I said the name, and then spelled it out-loud as we brailled with his hands on top of mine. Then, I asked him to repeat the name we just brailled. He cooperated for the first two names, and then became restless. So, we started applauding after every envelope was successfully completed, and that worked for another couple of names. 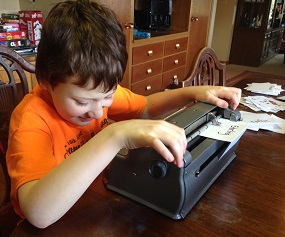 His reluctance to participate resulted in us having to move onto all sorts of ridiculous songs adding in the name of the student we were brailling. This, too, only lasted for a handful of names and then Eddie just kept repeating, “And then?” He was hoping this perceived torture would be coming to an end soon. If I had any candy on hand, that would’ve been my next bribery attempt.

I was reminded that even though I’m impatient at times, his patience level is even lower than mine. He gave me a solid ten minutes or so of working on valentines, and then he was simply done. I said, “two more,” and when those were done, I finished the rest on my own. I decided not to pick a battle, and instead be happy with the way he did participate.

Just to not let him get off too easily, I had him help me put braille stickers on the back of each envelope after he finished his snack. This required us to repeat each name again, and also allowed him to help with one more step of the process. I wouldn’t say this year’s valentine preparation was a complete success, but it was certainly a step forward from last year.