If you have a child with a visual impairment, you may have been warned early on not to become the “Fairy Godmother.” We so much want to provide for our children, and give them everything they need. Unfortunately, this often harms kids with special needs and blocks their chance of processing their own world.

For example, say your sighted child asks for a cup of milk. Inevitably, you will get up, walk to the fridge, pull out the carton, get down a glass, unscrew the cap, pour the milk, and happily hand it to the child. For the sighted child…they just took in the entire process of getting milk in one short moment. If they had the strength to lift the carton, they could now get milk for themselves.

If your child has a visual impairment, like my son, Eddie, that whole process was completely lost to them. They may have heard you open the refrigerator. They probably heard you walk across the kitchen and open some cabinets. However, what is most important to them was that their milk was delivered. In fact, it was magically delivered, almost as if it was out of thin air…just like from a Fairy Godmother.

I am the first to admit I am so guilty of waiting on my son. I have done it his entire eight years…and I should know better. The thing is, doing things for him, and meeting his needs myself, is a lot faster. If I make him walk through the steps of any and all tasks, he just gets mad…and that doesn’t make me a good mom…does it?!?

Actually, you and I both know it…it makes me a better mom. Any mom can do everything for her child. It may be exhausting, and irritating, but she can do it. She can do it when her kid is 1 year old…5 years old…10 years old…20 years old…40 years…WAIT! I do not want to be getting milk for Eddie all day long when he is 40…or even 20…or really even 10. 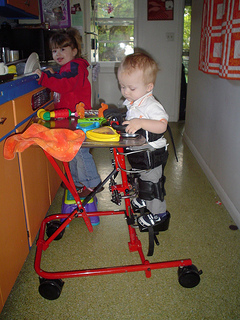 As I realized that I didn’t want to enable him forever, I started including him in more things. Even as a toddler, I had him in the stander in the kitchen (see photo) to be a part of the doing-dishes process (which required bribery with toys). This obviously doesn’t happen all the time, sometimes the Fairy Godmother does arrive, and Eddie always looks for her. I can’t help it…I’m still his mom. But, this weekend, Eddie showed me something…he showed me that he is no longer relying on others all the time.

It was early Monday morning…4:30am to be exact. Eddie was having a snack, because for some ridiculous reason he was awake. He was in a rocking chair, and I was only a couple feet away from him on the couch. His snack was on an end table, and while searching for it, he accidentally knocked it off the back side of the table. Just as I was waiting for, “Uh-oh!” or “HHH-EEE-LLL-PPP”…

…he scooted down off the front of the chair. He felt around on the floor in front of the table, and after determining it wasn’t there, he crawled around to the backside of the rocking chair. He scooted the chair forward…and then moved behind the end table…raked around some more for his snack…and FOUND it. Whew!

I was shocked because that was a lot of physical activity, especially for my son, and he didn’t even hit me up for help first. My first thought was, “He no longer relies on the Fairy Godmother!” Often, he will just see if she’s around…simply testing the waters by saying “uh-oh” and seeing if she’ll ask what he needs. Amazingly, that didn’t happen this time. The Fairy Godmother had left the building.

Can I keep her away? Probably not all the time…but, I’m going to try. Has anyone else had a moment when you realized some hard work was paying off? Saw your child with a visual impairment doing something independently that amazed you? I hope there are lots of those stories…and I hope that you share them.