Over the past few years that I’ve been writing for FamilyConnect, I’ve brought up the topic of braille multiple times. It is a constant in my life. Due to Eddie’s visual impairment, he simply can’t access print. For him to read independently, he has to learn braille. The problem is, and has been for quite some time, that Eddie simply hasn’t been that interested in Braille.

Since infancy, we have provided him with braille throughout his environment. Household items were labeled in braille, he had a plethora of braille books, and because I’m a teacher of the visually impaired, he is able to witness me writing braille frequently. We purchased a brailler for him early on, and hoped that like our sighted children, simple exposure would build interest.

Eddie is slightly intrigued by the concept of Braille. When we read to him, he seeks out the braille on the page. I think he understands that reading = braille and that books = braille. He likes to be read to, which does allow him to access literature through audio books, but as far as the actual learning goes…he has not been impressed.

We tried the traditional approach, used with most early readers, and he’d get easily frustrated. We tried different types of braillers, great options with audio feedback, but the novelty wore off fast. We’d get excited to see him engaged, but couldn’t get him beyond the curiosity phase, which didn’t last long. He simply wasn’t ready for such equipment or strategies. None of it MEANT anything to him.

In a constant search for a new strategy, I recently attended a braille workshop by Dr. Diane Wormsley. She teaches an educational approach that builds on what a child’s interests are…not on what we think their interests should be. Rightfully so, she calls it a “meaning-centered” approach.

When I left the class, it was the first time in months that I could easily picture Eddie reading. I could see a path, paved by his favorite things, that led directly to literacy. The first step was to pick two of his favorite words, and through collaboration with colleagues and Diane, I chose “alright” and “yee haw.” Two of many positive words that he loves to say and enjoys to hear.

I went straight home and told Eddie we were going to play a “game.” I had flashcards with the two words, and we practiced tracking the braille. Every time he slid his hands over the word I would say it in a funny or highly positive way. He was in hysterics, and eagerly did a few cards with me, sometimes even saying the word himself. It was the first time I had ever seen Eddie truly enjoy a braille lesson.

Later that night, I was walking Eddie to bed and he said, “Yee haw!” In response, I asked, “What was that other word you read?” He quickly said, “Alright!” I didn’t ask about the other word in the “game” or simply “the other word.” I asked for the word that he READ…and he responded correctly. I like to think this was a first step towards actively processing literacy. 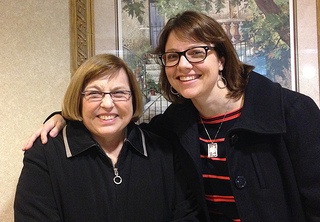 Of course, he won’t learn braille overnight…but I now can see a way. I never had any doubt that he could read, but I doubted how he would get there. Between myself and Eddie’s fantastic teacher of the visually impaired, he is going to read braille.

Because I now may be Diane Wormsley’s biggest fan, I had to get my picture taken with her (see inset photo). She is working on a book, and some of you will also be able to apply her approach with your own children. As I attend the AFB Leadership Conference in New York this week, I hope to find inspiration from other equally inspiring professionals, and become members of their fan clubs as well.