Last week, we took Eddie to an accessible gaming day sponsored by the Washington Talking Book and Braille Library for students who are blind or visually impaired. The event was organized by a local Teacher of the Visually Impaired (TVI) and included tactile board games, Legos, Play-Doh, lunch, and more. Eddie had a blast, as seen in this overly joyous picture of him. 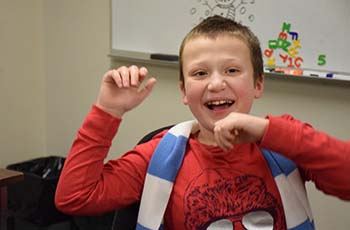 Because blindness is such a low incidence disability, many students in rural districts have never met another kid like them. Even within larger schools, being a student who is blind is very unique. When organizations like our state’s talking book and braille library offer events to get these kids together, it’s best to take advantage.

Due to Eddie’s additional disabilities, I didn’t really know if he’d even participate with the other kids. I wasn’t sure if he’d fit in or if he’d get too upset with his routine being out of whack. As I worried about all the “what ifs” for a few days, I decided asking his school if he could participate would be worth the risks. When the district’s teacher of the visually impaired and paraprofessional agreed to take him, I was impressed with their dedication to Eddie and looking forward to the benefits for all.

Attending with my “work” hat and my “mom” hat on helped me take it all in. I was most impressed with the level of empathy and acceptance shown by all the kids. Many of the students had additional disabilities or were separated by many years of age, and yet, they connected and had fun. Eddie enjoyed spending the day playing games with older kids, and with some coaching from his TVI, I think the older kids enjoyed him too.

Kids were directed to explain to Eddie what they were building in Legos by saying his name often so that he knew they were talking to him. Eddie was then willing to explore creations and listen attentively to those around him. Other students played music or sang songs, and Eddie soaked that right up too. He even played a game of Connect 4, and with some peer support, he continued to be engaged without the guidance of an adult.

Finding Eddie’s peer group isn’t an easy task. However, I couldn’t have been more proud of the kids we met that day. Their willingness to accept him and adapt for him resulted in an excellent experience for them all. Now, if we can only get Eddie to adapt for them… which we will get to, I’m sure.

Again, I’ve had another example of Eddie rising to and surpassing my expectations. It seems I’m always reminded to give him a chance even if I’m unsure. I’m grateful there are dedicated educators and programs out there offering unique experiences like this. As parents, we all need to participate more often, so our kids can reap the rewards.

Raising a Child with a Visual Impairment

Seeing Our Child Who Is Blind

Defining Our Children Who Are Blind or Visually Impaired

My Child with Multiple Disabilities Shares His Ability at Church

A Thankful Mom: Nancy’s Story of Raising Her Son Who Is Visually Impaired