This season, as I thought about the holidays, I wanted to be sure to include Eddie. When asked how Eddie enjoys the season…besides listening to Christmas music on headphones…I had no reply. I thought, “Is Eddie tattling on me? Is he telling the world that I let him veg out frequently with our holiday radio station?” Whether or not Eddie was calling me out on allowing a passive holiday existence, I realized I had to step up my game. 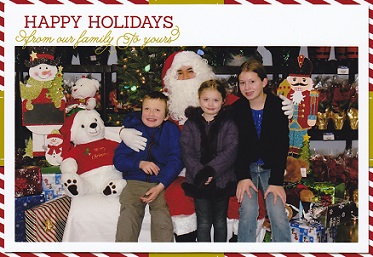 This idea spurred the articles I’ve written for FamilyConnect on incorporating the Expanded Core Curriculum (ECC) into the Holidays. Due to Eddie’s multiple disabilities, and simply his young age, I won’t be able to expose him to all my ideas this year. However, I’ve still made an effort to include him in our 2014 festive outings…as you can see in this impromptu free Santa photo from Wal-Mart, which he clearly enjoyed.

Our first holiday stop was to see the Broadway production of “How the Grinch Stole Christmas” the day after Thanksgiving. Eddie loves the Jim Carrey version of this movie, so I purchased tickets for the whole family two months ago. It sounded like a good idea at the time, but as the event approached, I was very nervous.

I wasn’t sure if he would understand the production, if he’d sit that long, or if we’d see an outburst that would ruin the show for everyone in attendance. In fact, as we neared the auditorium, his anxiety level went up, and so did mine. He was getting upset, and all I could see was eminent doom.

To my surprise, Eddie was simply fantastic during the entire show. We gave him a snack to keep him happy, but other than that, he listened right along with the rest of us. Near the end of the play, snow machines blew a soap-like substance into the crowd, and it suddenly became a multi-sensory experience. Eddie was enjoying the auditory and tactile production.

While watching the snow fall on my three kids, I started to cry. I can think of three times in the last year when I cried “happy” tears. The first was on Main Street in Disneyland last Christmas, the second was watching my kids take in the Circus, and this moment at the Grinch was the third. At each event I had chosen to include Eddie when I wasn’t sure he’d have fun…and every “happy” tear made it worth the risk every time.

So, for this particular outing in relation to the ECC, we covered orientation and mobility, social interaction, recreation and leisure, sensory efficiency, and independent living skills at an impromptu restaurant outing afterward. On top of simply enjoying a holiday event as a family, Eddie was learning, too. Every time we take him out of his comfort zone, it’s an opportunity for him to learn, and for us to teach. His success at the Grinch inspired further holiday adventures, to be continued…