Many children who are blind speak in a way called “Echolalia.” It basically means that their language is repetitive or “echoes” something they have heard. Usually it’s an immediate repeat, which is often true with Eddie, but I think of it as broader than that. Words and phrases can be learned from television, songs, or even from other people. It often is thought to be without meaning, and when it comes to my son sounds like complete nonsense at times.

His favorite time to echo phrases is when he finds himself really upset. Terms that come often are “Yo Gabba Gabba!” “Who lives in a Pineapple under the sea!!!” and I’m sure you’ve caught on to the theme here of random television one-liners. Lately, he’s added another surprising term. When upset, his teacher of the visually impaired has started hearing “I’m bringing sexy back!” Which she quickly replies, “Oh, no, you’re not,” as he throws a giant tantrum. Although I love Justin Timberlake and his music, I’m not sure this was his intention.

What I’m learning is that sometimes there is a glimpse of understanding in those crazy terms. He picked up the phrase, “I don’t care,” which sounds like it came straight from the mouth of my 11-year-old daughter. Recently, he spoke that phrase loudly and with perfect articulation in the middle of quiet prayer time at church. Although I’m sure he really felt the words, “I don’t care,” when I asked him to be quiet…I wish he would’ve kept it to himself. 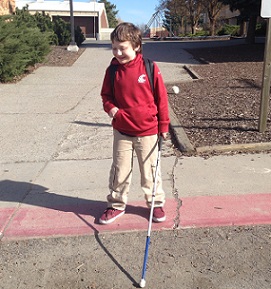 Along with echoing words, he also echoes whole conversations. This morning while walking him to school, we had a long discussion about what he’d do after school. I say “we” but it was really Eddie conversing with himself. It sounded much like this:

After having that fantastic one-person discussion, he stopped in his tracks. He then said, “School? No. No, school. OK. No school.” Which, I replied, “School first, then Grease, snack, and go downstairs.” Which of course he replied, “Yo Gabba Gabba!!!”

Although his language barriers are frustrating at times, you can’t help but appreciate the humor. Among the gibberish are some coherent thoughts bubbling to the surface. Frankly, I love his language, and the pattern of his thought. My goal isn’t to make him any different…but to make him more understandable to the world at large.

As Eddie gains more expressive language, I want him to share that with everyone. His language antics may make sense to those who love him…but they shouldn’t be kept from everyone else. I hope to work on helping him find more functional ways to communicate while keeping his humor and personality intact. Honestly, I’m always up for a little Justin Timberlake…and it sounds like Eddie is, too.