Having a child who is blind, requires spending lots of time teaching them to do things for themselves. Helping my son to become independent is maybe the most important part of being his parent. What I’ve been reminded of lately, is that teaching skills for independence makes things inconvenient for me…for now.

Eddie has been working on taking his own leg braces and shoes off. Those plastic orthotics can be real difficult to work with, but we’ve been teaching him how to remove them. Now that the skill is mastered, his shoes and socks are abandoned every time he has a few minutes alone. This is inconvenient for me when we have to be somewhere fast and I have to get those suckers back on.

A continual goal is to get Eddie to consistently use utensils to feed himself. It’s obviously much faster when he uses his fingers, and gobbles up his meals in record time. With utensils, it is always a battle, and although he can do it, the inconvenience shows up in the added time to every single meal.

Eddie spent years learning how to walk, and being brave enough to wander independently. Now that he is a self-determined explorer, he wanders all over the house and even outside regularly. This has become inconvenient for me as he leaves messes in his wake, and I have to keep a closer eye on him, so he stays out of the street.

These are just a few examples of some skills that Eddie has worked long and hard to acquire. Every time he learns something new, he inspires us to teach him more ways to be independent, which is inconvenient for us…for now. For now, we just have to deal with it, because in the long-run the tables will turn. 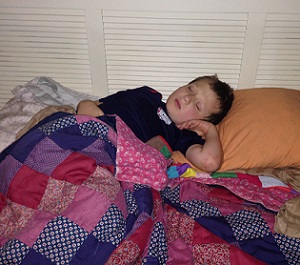 When he’s an adult, his independence will mean more independence for us, and more happiness for him. A little inconvenience now is worth it to increase his chances of having a better, fuller future. So, I just strive to be more patient, and take the sort-of bad with the really good…for now…because “now” will be gone in a flash.

Although I want to always think of him as the little boy pictured here asleep in my bed, he’s going to grow up fast. Someday, he’ll be bigger than me…in every sense of the word. I just want to make sure his future can be as big as possible, and showing him how to do things for himself is the best way I can make that happen.