Running errands can be tricky with any children, anytime. I like to be efficient and purposeful when getting things done, and kids don’t really work that way. I recently had a high need for food and more and ended up taking my two youngest to town, including my son who is blind. 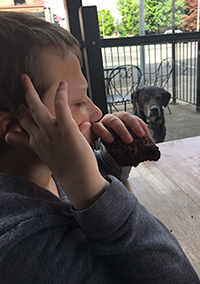 We started at a bakery due to gathering Mother’s Day treats for my pregnant sister, and it was a good excuse for baked goods. We found a parking space near the front, a manageable line, a gluten free brownie for my son, and an open table near a window. Eddie loved the snack and a dog passing by had to stop and drool too. We then headed to the mall.

The mall was a challenge; loud, unpredictable places always seem to be. After about a good hour of putting up with shopping, Eddie was ready for some down time. We headed to my sisters, with her treats in hand, and I decided to leave the kids with her while making the dreaded Saturday run to the grocery store.

Afterwards, I gathered the kids and headed home when I quickly realized I’d forgotten cabbage. I tried to tell myself it’s only cabbage. The additional store stop probably wasn’t worth it. But, I was making pulled pork sliders, and the thought of them without homemade coleslaw was almost unbearable.

Was it worth unloading the kids? Was it worth pushing them when they were already tired of errands and each other? Was it worth making an unplanned stop and throwing a wrench in our planned routine? Yes, I decided, yes it was.

While driving towards the store, I conjured up a plan. I made a big deal about forgetting cabbage and asked Eddie if he would help me. I said I had to stop by the store, and I was too tired to push the cart by myself. “Eddie, would you please help me,” I asked. Eddie quickly agreed and probably wondered why his Mom was SO lazy. 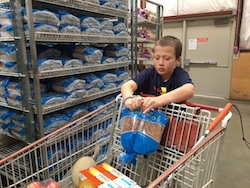 The plan worked like a charm. Eddie happily pushed the cart while his sister grabbed the goods. We talked about the grocery store, the aisles we traversed, and the scents in the air. While waiting in line, Eddie checked out the conveyor belt moving the cabbage and had a surprise visit from his Grandma’s friend. We were in and out in under 15 minutes even with a bit of learning mixed in.

My grocery store/extra stop worries were unnecessary. Yes, it’s only a cabbage. A cabbage that happened to make my slider delicious, and a cabbage that proved I overthink everything.

More from “Raising a Child Who Is Blind”

How Edward Came into the World

Gaming Day with Students Who Are Visually Impaired