As I’ve written before, I try to get my son involved in chores around the house. Lately while doing laundry, Eddie will show up and sort-of simply hover. While he is lingering I may say, “Eddie, do you want to help fold some clothes?” The response is often, “No.” I then might say, “Eddie, do you want to take these towels downstairs?” Again, I hear a definitive, “No.”

So, he continues to stand there, attentive to the task, but not wanting to jump right in. Since I can tell he is curious, I talk about what I’m doing, and describe what I’m taking in and out of the washer and dryer. I know that he has to learn how to do laundry someday, and I might as well start explaining what it’s all about now.

Although I encourage and sometimes make him help out, I never really know how much he is learning, or what information is sticking. Surprisingly, there is a laundry lesson that has been learned. When Eddie demonstrated his skills, his Dad and I were shocked and laughing hysterically. 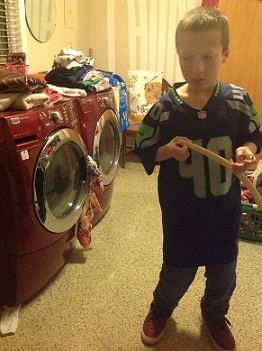 From the kitchen table where we were sitting, we could see the washer and dryer. We watched as Eddie slowly entered the laundry room, and as he came across a shirt of mine drying on a hanger. He picked it up, and deliberately removed the shirt. Next, he walked over to the washing machine, and got to work.

He opened the door, threw my shirt in, and shut the door (with part of my shirt still hanging out as you can see in this photo). He pushed a few buttons, and then walked away with the evidence of the hanger still in hand. Evidence that he had indeed confiscated my shirt…and also evidence that he certainly can help with laundry.

His Dad and I thought this was so funny, and immediately were proud of him for his learned and mostly executed new skill. I don’t think he’ll be sorting darks and lights anytime soon…but even I gave that up years ago. What I do think, is that he is one step closer to being an independent adult.