Eddie’s school has parent/ kid nights twice a year, switching up which parents attend with which kids. Based on the rotation, mother-son night arrives every other spring, and the last time I wrote about it was in 2013. It’s an event that I feel Eddie and I simply can’t miss.

Just like last time, Eddie and I dressed up for the official photo that gets taken and headed out the door. What was different from last time, was that I wasn’t nervous or afraid to attend. After a few years, the staff, students, and school families are well aware of Mr. Eddie and the unique perspective he brings to any event. There is always a risk of a meltdown, or unease due to his autistic nature…but it’s a risk that doesn’t keep us sitting at home.

At Mother-Son Night, there are board games set-up so kids can have a good time playing with each other and their moms. Two years ago, we didn’t even attempt the game aspect of this night. This time, thanks to the staff at Eddie’s school, we had a way to play along. 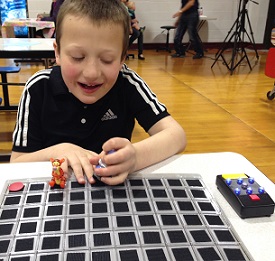 A couple weeks ago, while popping into Eddie’s classroom, I caught him playing the game in this photo with a paraprofessional. She had taken an American Printing House (APH) board used for math, and instead used it for a game board. Velcro had been added to the bottom of a couple toys to become game pieces, and an APH item called Talking Glowdice was being used instead of traditional dice. The fact that the “dice” talked really kept Eddie’s attention. The “winner” was the first person that moved through every space.

After seeing the game in the classroom, I knew it would be great for Mother-Son night, so I made sure to bring it along. Eddie ended up playing with me for about 30 minutes, which was a big deal for him. While we played, another student even joined us for a bit, and Eddie didn’t mind sharing. I didn’t mind seeing some unforced peer interaction…in fact, it even had me tearing up. I wasn’t expecting any major insight…but found that by simply having an adapted game, the night was eventful.

After seeing this game (and others) created by the staff at school, I’m inspired to do more things like that at home…especially now that he’s showing an interest. So, help me out! What games have you adapted, or what have you found ready to go for kids with visual impairments? I’d like more family game nights at home…and I’m hoping ideas from other parents will help make it happen.