As we move from spring into summer, I’m noticing that the seasons aren’t the only thing changing in our house. Our son is also moving forward in ways that seem monumental. He seems to be having a growth spurt in relation to independence, communication, and overall ability.

The first thing we noticed was his sudden knack for running his CD player. He still isn’t loading and unloading it, but he is operating all the keys and for the appropriate function. Instead of throwing a tantrum or tracking us down every five minutes to request, “Change song, please” he’s doing it on his own.

Along those same lines, he suddenly became interested in the keyboard that’s been set-up in his room for three years. He always has occasionally tinkered on it, but now he is experimenting with the choices of instrumental sound, demo tune, metronome beat, and even rhythm to accompany his singing. In the past, one wrong push of a button, and with the metronome in full swing, he’d be running for cover. The steady, beep…beep…beep would put him right over the edge. Now, it’s his toy of choice.

Communication has been something that Eddie always struggles with, and the last great success was a while ago when I talked about him using the word “or” when making choices. Today, he added another simple word that makes a huge difference. The word he busted out to my great surprise was simply…”and.”

Eddie had tracked me down, and was tugging on my shirt like he really wanted something. He then said, “Make a choice” because he knew that’s what I’d prompt him to do. Not having his tactile options close by, I gave him a verbal list of a few things he typically requests. Instead of saying, “I want _____” he threw me a curve ball. He said, “I want snack AND Teen Beach Movie.” That kid had just raised his game. With the understanding of the word AND, he is now able to ask for two things at once. 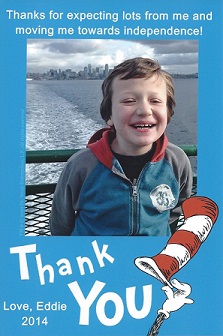 In a family where “inch”-stones are celebrated more than milestones, we’ve been more than pleased for the last month or so. His growth at home has spurred us to push his school for higher expectations. We know that our child has a lot of potential, but that isn’t obvious to everyone else. We have to remind them, and we’ll continue to do so.

Every year, we give out thank you cards to the staff that work with Eddie at school. It seriously is the least we can do for all their hard work. More than just a thank you, it’s also a reminder. It’s a reminder that Eddie does need them to work hard, to push him, and to expect more of him than anybody else. We have to keep moving him forward, and not get too comfortable with where he is today, because the next season will be even better.