We know friendships build self-esteem and offer a sense of belonging that can be hard to find. There are actually additional benefits that we cannot ignore for our kids who are blind and may have additional disabilities. I know it’s hard to imagine, but their relationships with kids may also be the key to employment.

Eddie is part of a very small community. From the first day of kindergarten, the kids knew who he was and sought him out. He’s been with them for six and a half years, and even though he has challenges with sensory regulation, language, and more… many of them don’t seem to notice. They still say "Hi," while rarely getting a response. They make a point of talking to him, even though his scripted response remains, "I am fine."

While at a football game this year, a couple kids came up to Eddie and were chatting. As they walked away, one kid shared to the other that Eddie gave him a "high five" in science class. As they left, Eddie said "Bye" and even included the kids’ name. We couldn’t have told you who they were, but he could. They may not notice all of the different things about Eddie, but he is noticing them.

Near the start of school, one of his classes had an assignment where they had to write down comments for each student. Eddie’s is pictured here. You’ll see the kids called him "awesome," "cool," "talented," and "nice." They mentioned he was good at singing, piano, and percussion. Not one kid wrote "blind" or "autistic" or "upset." Those are the labels adults use… not kids. 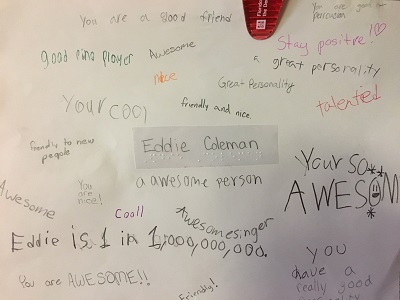 The one that really got me was, "friendly to new people." Wow. Think about the "new" kid that wrote that comment about Eddie. Eddie, who has limited language, and who finds it hard to interact, made this kid feel welcomed to their school. As a parent, I’m so proud of that.

I’m also proud that Eddie is giving his classmates exposure to exceptionalities. This is important because of what I mentioned above. They will be in the workforce together. These kids will interview our children for jobs or will work alongside them. If it isn’t our kids, it will be kids like them. There is still extremely high unemployment for people who are blind, and our kids can help change that.

Our kids will teach them that people with disabilities are capable and part of their community. They will teach them that just because a child may be blind, and maybe even Autistic, they can still make a difference. When I wonder about the impact Eddie can make, I now remember that he made a difference for the new kid. I also get excited knowing there are many other kids like Eddie out there changing the world… just by being themselves.

Resources for Parents of Children with Multiple Disabilities

The Future Starts Now: Discovering the Possibilities for Your Multiply Disabled Child

Raising a Child Who Is Blind and…