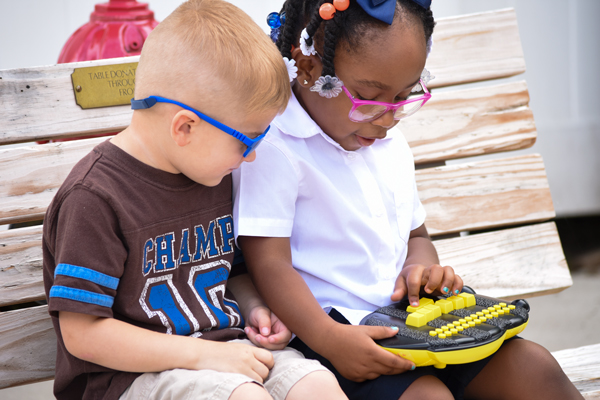 Starting the Journey Every child travels a unique path. From the time they are born and as they grow, every child sets out on a personal journey, guided by parents, teachers, mentors, and others. But when your child is born blind or begins to lose their vision, parents are faced with making decisions that they … Continued

I’m a strong advocate for Braille literacy. It can bridge the gaps that many people with low vision face. When my parents brought me home from the hospital, they thought I was a very typical, healthy baby and they joyfully expected that very soon I’d learn to recognize their faces and the world around me. … Continued

A warm hello to you, parent or family member of a young child who is blind or visually impaired. My assumption is you are here because your child has recently been diagnosed with an eye condition, or you suspect your child has a visual impairment. You likely wonder if your child is eligible for vision-related … Continued

There’s just something about braille, isn’t there? By “something” I’m actually not referring to how downright adorable it is to watch a toothless babe patting the pages of a braille book, or how we’re beaming with pride when a six-year-old (whose grin exposes she’s also rather toothless) reads a simple sentence of her braille work. … Continued

Valentine’s Day is right along the corner. Nothing could be better than to give or receive a fully accessible card in braille. This is possible but time is running out. We have several recommendations but they are time sensitive so check out our Valentine’s Day Card, Craft, and Gift Ideas for Children Who Are Blind … Continued

Editor’s note: This is the third blog entry that both informs and requests the assistance of families in answering important questions that impact all who use braille. Please help Drs. Holly Lawson and Kathryn Botsford with this effort. This is an exciting month: Louis Braille’s birthday, World Braille Day, and the United States has officially … Continued

The year was 1821. On a day like any other, 12-year-old Louis Braille, blinded from an eye injury in his father’s leather shop and subsequent double-eye infection, attended school outside of Paris. This day, however, he met Captain Charles Barbier. Barbier, a retired artillery officer, showcased his invention to Louis’ class. The invention was called … Continued

Thank you, holiday season, for generating major motivation for our beautiful little people to read and write. When my children come home from school this afternoon I will ask them to write a Christmas wish list. I’ll grin as I watch their uncharacteristic enthusiasm for literacy. My oldest, the perfectionist, will ask for help with … Continued