Learning to Play with Other Children as a Visually Impaired Child

Play is one of the ways that young children learn about their world and, at the same time, begin to develop their social and language skills. There are a number of things you can do to help your child learn to interact with other children by walking her through the steps of a social situation.

Children as young as a year old begin to be interested in other children. Although they don’t usually play with one another, they may play near each other and watch each other. At this stage, you won’t see them taking turns with a toy or imitating each other. They’re more focused on learning about their world and are very much caught up in themselves.

Even if your baby isn’t ready to play with other children yet, you can help her prepare for that next step. When there are children about her age nearby, watch how they play. Since your baby may not be able to observe this, she’ll need you to show her what you’re seeing—how to use a toy, play peek-a-boo, or do a simple game of taking turns banging blocks together. When you show your baby how to play with a toy, it’s a good idea to sit behind her and use either the hand-under-hand or hand-over-hand approach. 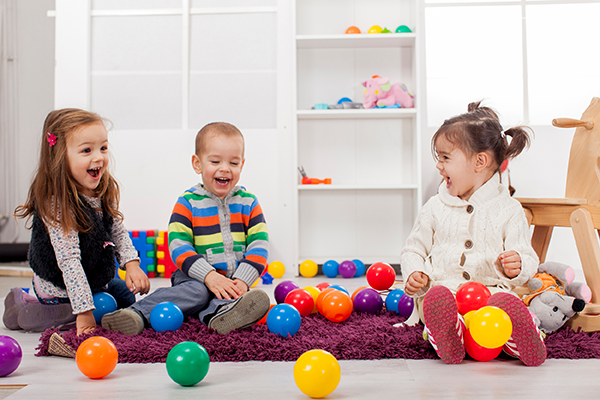 Playing with Other Toddlers

All toddlers have a lot to learn when it comes to playing with other children their age. Sharing toys and taking turns in a game aren’t instinctive. These are skills children need to learn, and your toddler will probably need some help from you to understand and practice those behaviors. Start with one activity, such as sharing a toy. You can model the behavior when the two of you are together by asking to take a turn playing with one of her toys then offering her a turn with the toy after you’ve played with it for a minute or two. When she’s with another toddler, remind her to share her toy with the other child. But don’t be surprised if your child’s playmate is reluctant to return the favor and needs to be encouraged to continue sharing back and forth.

You can use the same approach to help your toddler learn to play the way other children do—again working one-on-one with her first to give her practice. Ideally, have two of the same or a similar toy, one for each of you. Follow her lead as she plays with the toy—a truck, for example. Then encourage her to do on her own what you’re doing with the truck, perhaps rolling it up an incline while making “motor” sounds. This is called “parallel play,” since the two of you are playing side-by-side but not necessarily together.

A local park or playground is a likely place for your toddler to hear other children at play and begin to learn how to be part of their activities. If a child nearby is playing with a toy, describe what he’s doing if she can’t see him clearly and help her do the same with her toy. You might ask him to tell her what he’s doing. If the two of them seem comfortable playing with their toys side-by-side, it’s time for you to sit back and just keep an eye on them.

Older toddlers often begin to use imaginative play—such as pretending to go grocery shopping. For sighted children, the things acted out in pretend play are often based on experiences they’ve had and things they’ve observed. The more experiences your child has at home and in the community, the more she’ll have to draw on when beginning to play with other children.

You can help her understand and have fun with pretend play by giving her some practice. For example, give each of you a role and act out a scene that might be based on one of her storybooks or on an imaginary shopping trip. You might want to play it one way first and then exchange roles with your child playing the grownup and you playing the toddler.

Learning to Play with Other Children as a Visually Impaired Child
Social Life and Recreation: Playing with Your Blind Baby or Toddler