Cognitive Disabilities and Your Blind Child 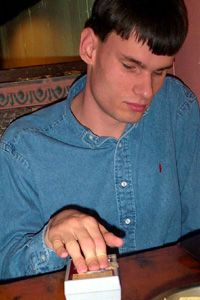 Children who have multiple disabilities that involve cognition, or thinking, have difficulty understanding information and processing it. A common cause of cognitive disabilities is an intellectual disability. It is also possible for a child to appear to have cognitive disabilities because of the combined effects of his other disabilities on his ability to function. For example, a child who is blind and has severe cerebral palsy will be limited in his ability to move and to observe others in day-to-day activities. When he is taken into a kitchen to help in preparing a snack, he may not know about a can opener because he has never seen one, touched one, or used one. But with exposure and instruction, he may be able to understand what a can opener is and does, although he may not at first appear to grasp the concept. It is therefore important that a teacher of students with visual impairments be involved in assessing a visually impaired child suspected of having cognitive impairment to make sure the effects of his visual impairment are taken into consideration.

To learn steps in a routine, such as dressing himself or going to the mailbox to get the mail, your child with visual and cognitive disabilities needs many opportunities to practice the steps in the routine. Repetition is essential for learning and so is consistency in always presenting the information in the same manner (also see “Routines Promote Communication and Understanding”).